Cruise Stopped by Police for Headlights Off -- Why Is This a Big Deal?

In April 2022 San Francisco police pulled over an uncrewed Cruise autonomous test vehicle for not having its headlights on. Much fun was had on social media about the perplexed officer having to chase the car a few meters after it repositioned during the traffic stop. Cruise said it was somehow intentional behavior. They also said their vehicle "did not have its headlights on because of a human error" (Source: https://www.theguardian.com/technology/2022/apr/11/self-driving-car-police-pull-over-san-francisco) 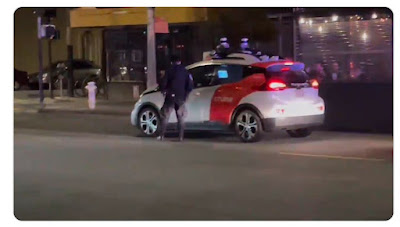 The traffic behavior indicates that Cruise needs to do better making it easier for local police to do traffic stops -- but that's not the main event. The real issue here is the headlights being off.

Cruise said in a public statement: "we have fixed the issue that led to this." Forgive me if I'm not reassured. A purportedly completely autonomous car (the ones that are supposed to be nearly perfect compared to those oh-so-flawed human drivers) that always drives at night didn't know to turn its headlights on when driving in the dark. Seriously? Remember that headlights on at night is not just for the AV itself (which might not need them in good city lighting with a lidar etc.) but also to be visible to other road users. So headlights off at night is a major safety problem. (Headlights on in day is also a good idea -- at least white forward-facing running lights, which this vehicle also did not seem to have on.)

Cruise says these vehicles are autonomous -- no human driver required. And they only test at night, so needing headlights can hardly be a surprise. But they got it wrong. How can that be?

This can't just be hand-waved away. Something really fundamental seems broken, and it is just a question of what it is.

The entire AV industry, including Cruise, has a history of extreme secrecy and in particular lack of transparency with safety. So we can only speculate. Here are the possibilities I can think of. None of them inspire confidence in safety, and they tend to get worse as we go down the list.

Again, we don't really know the situation because Cruise is trying the "nothing to see here .. move along" response to this incident. But none of these scenarios is comforting.  If I had to guess my money would be on #3, simply because #4 would be too irresponsible to have to contemplate. But really, we have no way to know what's really going on. And it might be another alternative I have not considered.
Cruise should take this as a wakeup call to get their safety house in order before they have a big event. Blaming safety critical failures on "human error" is generally indicative of a poor safety culture. They have a chance here to turn the ship around -- before there is harm to a road user.
Is there a scenario I missed that is less of a concern? Maybe Cruise will give us a substantive explanation. If they do I'll be happy to post it here as a follow-up.
-----------------------------------------------------------------------------------
Kyle Vogt at Cruise sent me a response on LinkedIn on 4/16/2022:

I’d like to respectfully disagree with your characterization of this event. Allow me to provide some context.

We apply SMS rigorously across the company, which as you probably know includes estimating the safety risk for known hazards and having a process to continuously surface new ones.

We then apply resources accordingly to attempt to reduce the overall safety risk of our service as effectively as possible. This is a continuous process and we will continue even though we’ve passed the point where we can operate without backup drivers.

Rarely would this direct us to focus on things that are extremely unlikely to result in injury, such as lack of headlights on a single vehicle for a short duration of time. We have a process in place to ensure they are functioning properly, but the safety impact of that process failing is low.

Our use of SMS directs the majority of our resources towards higher risk areas like pedestrian and cyclist interactions. These are far more complex and of higher potential severity.

I firmly believe that’s this is the right approach, even if it means our vehicles occasionally do something that seems obviously wrong to a human.

@Kyle Vogt: Thank you for responding to my post. I am glad to hear that you have a Safety Management System in place now. This is excellent news.
Hopefully your SMS folks are telling you that the headlight-off incident should be treated as a serious safety process issue rather than being sloughed off as a "no big deal." A healthy safety culture would acknowledge this is a process failure that needs to be corrected rather than making excuses based on "safety impact of that process failing is low." Process failures in safety critical system operations are a problem -- period. An attitude that less critical processes don't matter is easily toxic for safety culture. Safety culture is how you do business, and if disregarding procedures that are seen as less than the most critical is how you do business, eventually that will catch up with you resulting in loss events. More simply: discounting a low severity process failure is at odds with your statement that you "apply SMS rigorously across the company."
I would say that headlights off has a substantive potential severity for other road users because they are signaling/warning devices to help people know to get out of the way if your vehicle should malfunction. For example, with headlights off you cannot take controllability credit for the other road user jumping out of your way if you fail to detect them, because they won't see headlights as an indicator of your approach at night. Moreover, having headlights on is the law.
Regardless of your statement that you are focusing on higher severity issues, a process failure for something as simple and obvious as making sure headlights are on at night is very disconcerting, and raises concerns over your safety process quality in general. A more transparent analysis of how that process failed and whether other higher severity process failures are occurring that have not been made public would be the right thing to do here to restore public trust. If this is the only time the headlights were off and your other pre-mission procedures have a high compliance rate, then OK, stuff happens. However -- if pre-mission procedures are hit or miss and you don't even keep track of procedural errors that don't result in a scary pedestrian near-miss, that is quite another. If you don't have the procedural metrics to show you are operating safely, then probably you aren't operating safely. Which is the case?
Your GM-issued VSSA from 2018 seems outdated and has no mention of an SMS. So it is difficult for the public to know what your plan is for safety. More transparency and communication regarding your safety process is essential to help build public trust.

All comments are moderated by a human. While it is always nice to see "I like this" comments, only comments that contribute substantively to the discussion will be approved for posting.