I've been on a personal journey to understand what safety really means for autonomous vehicles. As part of this I repeatedly find myself in conversations in which participants have wildly different notions of what it means to be "safe."  Here is an attempt to put some structure around the discussion: 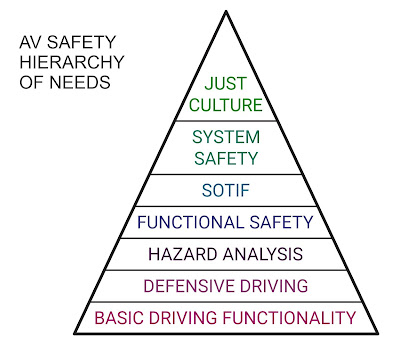 An inspiration for this idea is Maslow's famous hierarchy of needs. The idea is that organizations developing autonomous vehicles have to take care of the lower levels before they might be able to afford at higher levels. For example, if your vehicle crashes every 100 meters because it struggles to detect obstacles in ideal conditions, worrying about nuances of lifecycle support won't get you your next funding round.

To succeed as a viable at-scale company, you need to address all the levels in the AV maturity hierarchy. But in reality companies will likely climb the levels like rungs in a ladder. To draw the parallel to Maslow's needs hierarchy, if a company is starving for cash to run its operations, they're going to care more about getting the next demo or funding milestone compared to lifecycle safety considerations. That will only change when venture funding bakes higher levels of this safety maturity hierarchy into their milestones.

As with the Maslow hierarchy the levels are not exclusive. Rather all levels need to operate concurrently, with the highest concurrently active level indicating progress toward safety maturity.

You might see this differently, see some things I've missed, etc. Comments welcome!

Summarizing a few comments so far:

- Where is cybersecurity?  It is there, but doesn't feel like there is a certain layer below which you ignore and above which you need to have 100% covered.  I've seen it done before safety, or barely done at all. Commonly both (security for IT infrastructure side, insecurity for vehicle side). It might be a parallel track on the side.

- Socio-technical aspects. I'm thinking perhaps these go between system safety and Just Culture. (In a sense it's system-of-systems safety if the other systems are non-technical systems.)  This will need to include not only road systems and infrastructure (both of which UL 4600 includes in "system safety"), but also regulatory systems, insurance, and so on.

- Whether functional safety should be at a lower level (because OEMs typical do that sooner, but in my experience non-OEMs don't, so it might simply be layer order changes depending on history)