Showing posts from June, 2022
Show all

- June 26, 2022
PA HB 2398 would legalize autonomous vehicles (AVs) without human drivers in Pennsylvania. Having passed the PA House, it is pending in the PA Senate Transportation Committee . While the bill has improved, my 25 years of experience working on AV safety at Carnegie Mellon University leave me with significant remaining concerns: A municipal preemption clause would prevent Pittsburgh from restricting the testing of immature self-driving vehicle technology in active school zones and other high risk locations. A loophole regarding vehicles “approved for noncommercial use” apparently exempts most AVs from certification when using conventional vehicle retrofits, potentially rendering the bill toothless. Test drivers are not required to conform to an established industry standard for testing safety as done elsewhere in the US. Argo AI is
Post a Comment
Read more 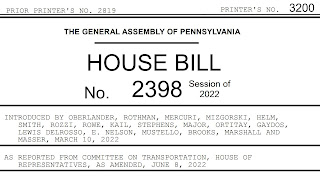 This past week the PA House Transportation Committee significantly revised and then passed a bill granting sweeping authority to operate Highly Automated Vehicles (HAVs) in the Commonwealth of Pennsylvania. That includes light vehicles, heavy trucks, and platoons of heavy trucks. This bill has evolved over time and seems a better candidate for a final law than the older, much more problematic Senate bill . It has some good points compared to what we've seen in other states, such as an insurance minimum of $1M, and placing PennDOT in regulatory control instead of Public Safety. By way of contrast, in other states the State Police are in charge of regulating (they have no real ability to do so, and realize this, but the HAV industry pushed to have it this way), and insurance minimums are as low as $25K or $50K. So we're doing better than some other states.  The PA bill establishes an advisory committee, but it is unclear whether it will have much power, and its current mandate is
Post a Comment
Read more
More posts