This posting lists a number of major issues and concerns with the Pennsylvania legislation introduced in January 2022 to change how the Commonwealth regulates Highly Automated Vehicles (HAV). It deals with technical issues with the bill and especially aspects of safety. The short version is that this bill should NOT be passed without SIGNIFICANT changes. 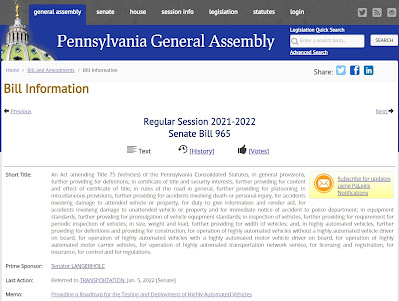 Green text has been added or modified since initial post responsive to comments.
As of afternoon of 1/26/2022 the bill has been amended and committee sent to PA Senate. This writeup has not yet been updated to reflect any substantive changes.

Overall, this bill suffers from a significant imbalance regarding the tradeoff between risks and benefits to Pennsylvania residents. Companies stand to benefit enormously by using public roads as a living laboratory to assist in developing automated vehicle technology. However, other road users are not afforded commensurate safety and compensation assurances for the risks they take from sharing the road with immature technology that presents a real and present danger to other road users. Especially of concern is the palpable risk to vulnerable road user (pedestrians, cyclists, etc.).

Additionally, much of the bill is drafted in a way that creates loopholes and exploitable ambiguities. Regardless of root cause and intent, the net effect is to weaken the bill dramatically, to the point that it amounts to not much more than a free pass of HAV companies to do whatever they want. (Even insurance requirements, such as they are, would be scant deterrent to a company chasing a trillion dollar market. Even a $5 million payout to an injured party is too easily characterized as a cost of doing business when development involves a multi-billion dollar war chest.)

This bill, if passed as-is, will dramatically weaken what safety protection Commonwealth residents have under the current HAV regulatory posture. Passing this bill as it is now will be actively harmful -- it is worse than doing nothing.

The press conference made a big point that local HAV companies were consulted for the bill -- but not public interest stakeholders. This entire situation really brings into question whether those companies should be considered trustworthy in terms of sincere regard for the public interest vs. their own profit motives (see SSRN paper sections II, IV, and Conclusions).

There is no simple fix for this bill. It needs a major overhaul.

Below are some (potentially aggressive) interpretations of this bill to point out how problematic it is in its current form:

It seems likely that at least some of the above is due to drafting errors and internal inconsistencies. For example, the $1 insurance limit might be intentional, or might just be worded incorrectly as a maximum instead of a minimum $5 million insurance requirement. One would hope that a responsible company would not act so egregiously -- but not all companies are responsible, and mere hope is not a responsible plan for public safety.
These issues illustrate the point that this bill doesn't just need a little clean-up of loose ends. It has major issues and should be entirely revisited.
DETAILED NOTES:

Below are notes on issues found in a review of the bill language:

Some issues might be fixed easily, but others will likely require more pervasive changes. Be that what it may, a bill that has this much of an effect on public safety should be easy to understand for all stakeholders. And certainly should not be mispresented by its sponsors (as was done, for example, by claiming SAE safety standards had been incorporated).
It seems likely that bill advocates will argue that deficiencies in the bill might be made up for by PennDOT guidance and policies. Maybe so -- and maybe not.
It is also possible other sections of the vehicle code interact with this bill in counter-intuitive ways. Still, since we've already heard clearly inaccurate statements about the bill, we need some more transparency as to the actual regulatory outcome will be, especially since the bill was developed without broad stakeholder input.
Regardless, it seems ill advised to put out a bill with known deficiencies in hopes that they might be made up for later. Why not get it right in the first place?
Additional content that might provide helpful perspective, added after initial piece was written are below. This is all new below this point, but not in green:
The fix to this bill needs to do three things:
Philip Koopman is an associate professor at Carnegie Mellon University specializing in autonomous vehicle safety. He is on the voting committees for the industry standards mentioned. Regulators are welcome to contact him for support at koopman@cmu.edu
Note: text in green was added after initial posting in response to comments.