The Tesla manual door releases -- and lack thereof in some cases -- present unreasonable risk. What in the world were they thinking? Really bad human interface design. Cool design shouldn't come at expense of life critical peril. This article this week sums up the latest, but this has been going on for a long time.Tesla fans seem to be saying that it is the driver's responsibility to know where the manual release latch is to escape in case of fire. Anyone who doesn't is (and has in past fires) been ridiculed on-line for not knowing where the manual release is hidden. Even if they died due to not successfully operating the control, or having to kick the window out, somehow they are the idiots and it is their fault, not Tesla's. (If someone you love has died or been injured in this way you have my sympathy, and it is the trolls who are idiots, not your loved one.)On-line articles saying "here's how to operate the door release so you don't die in a Tesla fire" tell you there is a problem. This design is unreasonably risky for real world use. A "bet you didn't know -- so here is how to not die" article in social media means there is unacceptable risk. Example:  "Tesla Model Y fire incident: remember, there's a manual door release, here's how to use it in an emergency."Front doors you have to lift up a not particularly obvious lever in front of the window switches that is easy to miss if you don't know it is there. Maybe if you have used it a few times -- but if you never realized it is there or you have rented/borrowed the car, good luck with that.  I'd probably have trouble finding it even if I weren't suffocating from smoke from a battery fire. (Have you ever had to consult the owner manual to find your hood release? Imagine doing that to find out how to open the door when your car is literally on fire -- oh, but if it is an electronic manual and you've lost power, you can't do that on the center console, can you?)

And if you're a passenger and driver is unconscious you will have issues. Etc. Do you read all the safety instructions in the driver manual when you catch a quick ride as a passenger with a friend? Does your friend brief you on escape safety features so you can exit before a 5 minute ride? Thought not.But wait, there's more:

So I guess the passengers in the back are kind of expendable. For many that will be the kids.
This is stunningly bad human interface design. It is entirely unreasonable to expect an ordinary car owner to know where a hidden/non-obvious emergency control is and activate it when they are trapped inside a burning car. Let alone passengers. Apparently without mandatory training and mandatory periodic refresher training.Anyone who thinks it is reasonable to expect someone not trained in military/aviation/etc. to get this right probably has not served or been through that type of training. I have been through tons of training. Emergency drills that might give some nightmares (sealed inside a tank with broken pipes and told to plug the flooding is extra-special). And a few times the real thing. Not always with perfect execution, because there is compelling data showing humans suck at performing complicated, non-reflex-trained tasks under stress (and thus, more practice, more drills). After all that, I wouldn't want to risk my life on this hot mess of an egress system.
Education and shaming won't prevent the next death from this unreasonable risk.

I can't imagine why NHTSA wouldn't want to do a recall on this.

(To the extent this is true of other brands that is equally problematic. I don't have info on them.)

EDIT: a Linkedin commenter pointed me to this story about a Corvette fatality related to a similar issue. From what I can tell repair parts for Corvettes indicated a clearly marked egress pull that is on the floorboards. So not ideal, and possibly difficult to see if you are already in the seat. Worth reconsidering. But not literally hidden (or missing) as in Teslas, and certainly not in vehicles being sold as family cars.  Perhaps now that Tesla has pushed the enveloped past any reasonable limits it's time for standards on egress actuator visibility and accessibility.

This has been a known issue at least since a 2019 crash, summarized here: https://www.autoblog.com/2019/02/28/tesla-fiery-crash-closer-look-door-locks/     That fatality also had to do with door handles not popping up after a crash, so a rescuer was unable to open doors from the outside. It's time to pay attention before more people get trapped inside burning cars. 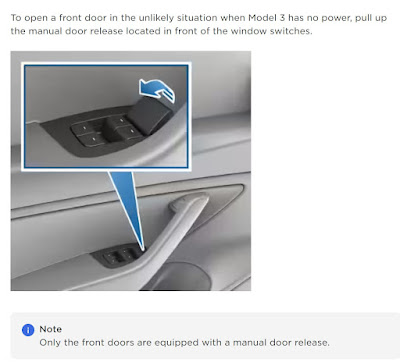 Apparently these require tools to actuate: "To reach the manual releases for the rear doors, you have to remove a rubber mat at the bottom of their storage boxes. After that, you have to open a small plastic lid, which the TFL folks only managed to do with a flat-head screwdriver. Again, it is a procedure that demands tools and accurate information. Imagine if the car is on fire just after a crash…" 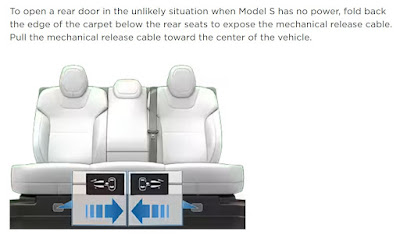 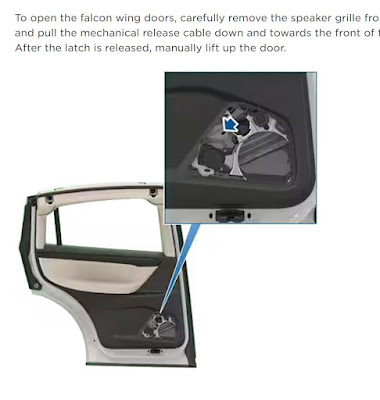