- August 14, 2018
One of the speakers at AVS last month mentioned that there was a Code of Practice for ADAS design (basically, level 1 and level 2 autonomy).  And that there is a proposal to update it over the next few years for higher autonomy levels.

A written set of uniform practices is generally worth something worth looking into, so I took a look here:
https://www.acea.be/uploads/publications/20090831_Code_of_Practice_ADAS.pdf 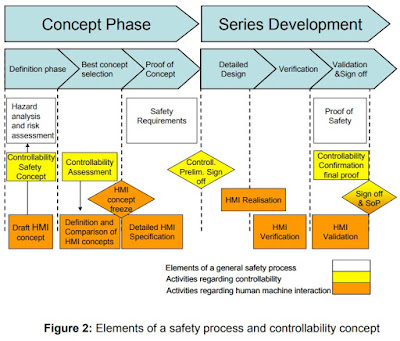 The main report sets forth a development process with a significant emphasis on controllability. That makes sense, because for ADAS typically the safety argument ultimately ends up being that the driver will be responsible for safety, and that requires an ability for the driver to assert ultimate control over a potentially malfunctioning system.

The part that I actually found more interesting in many respects was the set of Annexes, which include quite a number of checklists for controllability evaluation, safety analysis, and assessment methods as well as Human-Machine Interface concept selection.

I'd expect that this is a useful starting point for those working on higher levels of autonomy, and most critically anyone trying to take on the very difficult human/machine issues involved with level 2 and level 3 systems.  (Whether it is sufficient on its own is not something I can say at this point, but starting with something like this is usually better than a cold start.)

If you have any thoughts about this document please let me know via a comment.