I'm very pleased to share a publication from our NREC autonomy validation team that explains how computationally cheap image perturbations and degradations can expose catastrophic perception brittleness issues.  You don't need adversarial attacks to foil machine learning-based perception -- straightforward image degradations such as blur or haze can cause problems too.

Our paper "Putting image manipulations in context: robustness testing for safe perception" will be presented at IEEE SSRR August 6-8.  Here's a submission preprint:

Abstract—We introduce a method to evaluate the robustness of perception systems to the wide variety of conditions that a deployed system will encounter. Using person detection as a sample safety-critical application, we evaluate the robustness of several state-of-the-art perception systems to a variety of common image perturbations and degradations. We introduce two novel image perturbations that use “contextual information” (in the form of stereo image data) to perform more physically-realistic simulation of haze and defocus effects. For both standard and contextual mutations, we show cases where performance drops catastrophically in response to barely perceptible
changes. We also show how robustness to contextual mutators can be predicted without the associated contextual information in some cases. 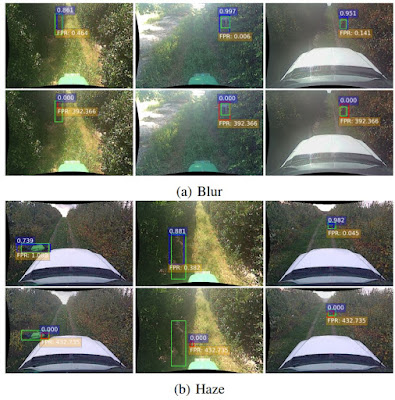 Fig. 6: Examples of images that show the largest change in detection performance for MS-CNN under moderate blur and haze. For all of them, the rate of FPs per image required to detect the person increases by three to five orders of magnitude. In each image, the green box shows the labeled location of the person. The blue and red boxes are the detection produced by the SUT before and after mutation respectively, and the white-on-blue text is the strength of that detection (ranged 0 to 1). Finally, the value in whiteon-yellow text shows the average FP rate per image that a sensitivity threshold set at that value would yield. i.e., that is the required FP rate to still detect the person.